The companies operating under the Glin trade mark have combined different wooden activities already in the past and have preserved their basic activity being the production of wooden components to this date in spite of many organisational changes. 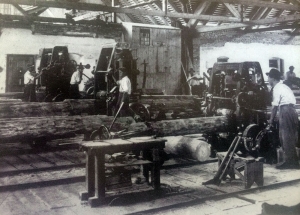 The origins of the wood processing in Nazarje go back to the year 1901 when the first industrial saw, then the second largest in Slovenia, was set up the owner of which was the Italian company Fratelli Feltrinelli. The scope of wood processing gradually increased with a building of new production plants over the decades.

In 1929, the then largest crate manufacturing company in Slovenia was established and the export of crates to Israel saved the company from the crisis.

In 1960, the wooden components processing plant and a new mechanised saw mill were built.

In 1967, then then largest and state-of-the-art production plant of particleboards in the country was built and at the beginning of the 1980s, a plant for particleboard processing, the production of furniture as well as the saw mill for small round wood were built.

In 1978, the plant for particleboard processing merged with the SOZD Gorenje Velenje and thus, the sales network extended and new products were introduced.

In 1992, the company conducted a de-merger with the Gorenje Group and was reorganised into Glin by establishing the subsidiaries within the holding.

Today, the Glin Nazarje Group successfully pursues all the trends in the sector. It is distinguished by the quality products and services as well as a long list of customers who put their trust in our manufacture and installation of the wooden components.